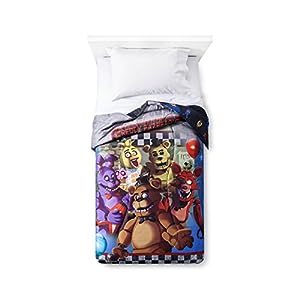 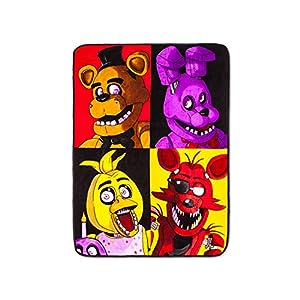 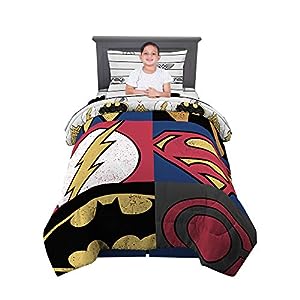 FIVE NIGHTS AT FREDDY’S DESIGN: Add some flair to his bedroom with this colorful Five Nights at Freddy’s Sixth Generation bedroom set with Foxy, Chica, Golden Freddy, Freddy and Bonnie front and center, waiting to jump scare him into bed.
FUN AND COLORFUL: Fans of the popular computer game will love the comfort and exciting style this bedding set offers. Kids can cuddle up to the cute and colorful imagery and parents will appreciate the quality of this cozy comforter and sheet set.
TWO DESIGNS IN ONE COMFORTER: Bold character imagery of the animatronic gang from Freddy Fazbear’s Pizza is featured on one side of this comforter. When it’s time to redecorate, simply flip it over to reveal an all-over character verbiage print on the other side. 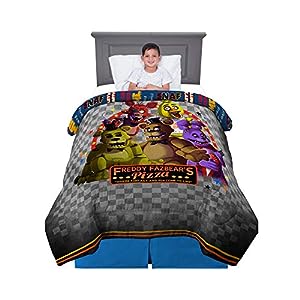 LOST KITTIES DESIGN: The Lost Kitties bring adorable “cattitude” to your child’s bedroom with this comfy and colorful reversible comforter.
FUN AND COLORFUL: Kids will love cuddling up in the warmth of this soft and cozy comforter alongside the colorful cats from the Hasbro Lost Kitties collection.
TWO DESIGNS IN ONE COMFORTER: Get two great looks in one with this reversible Lost Kitties comforter. Fans of the Hasbro toys will adore the adorable oversized image of their favorite collectible cat. When it’s time for a change, they can flip over the comforter to reveal a fun all-over character design. 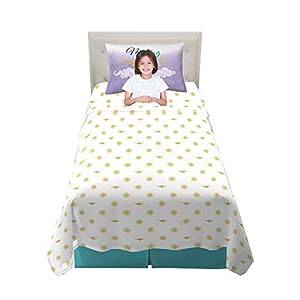 The full fitted sheet is 54″x75″x10″, the flat sheet is 81″x96″ and the two 20″x30″ pillowcases
Made of 100% polyester microfiber
Machine wash cold with like colors before use: use non-chlorine bleach if needed. Tumble dry low, remove promptly. Use warm iron if needed. 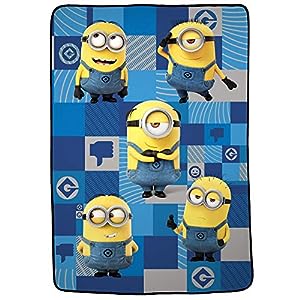 SOFT PLUSH QUALITY: Your little gamer will feel safe and cozy wrapped in this soft blanket made from super soft plush microfiber. The soft and inviting texture of the high-quality material keeps kids warm and cozy.
FUN AND COZY BLANKET FOR ANY OCCASION: Crafted for comfort, this playful blanket will instantly become a bedtime favorite. The lightweight and easy to carry blanket is the perfect companion for easy sleepovers, camping, traveling and playing. A great travel accessory for use in home, car, camping and sleepovers for napping and cuddling.
EASY CARE: Blanket can be tossed into the washer and dryer without worrying about the color fading or the need for ironing. The material is wrinkle-resistant making it a great choice for any child’s room. 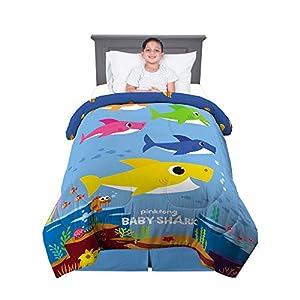 L. O. L. SURPRISE! DESIGN: Give her bedroom a rock-and-roll makeover with this colorful comforter featuring the adorable LOL Surprise dolls Diva and Rocker.
FUN AND COLORFUL: She’ll feel like a rock star every time you tuck her in with this brightly colored LOL Surprise comforter. The fun reversible design and soft microfiber material make it a versatile and comfortable choice both kids and parents will love.
TWO DESIGNS IN ONE COMFORTER: Keep her décor fresh with two cool looks on one warm comforter. One side features Diva and Rocker with the slogan I Rocked B4 I Could Walk on a bright pink background. Flip it over to reveal an all-over character print on a bright purple background.